Literal Calm in the Midst of a Storm 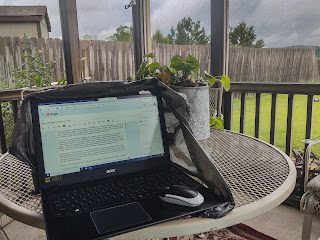 It's been a terrible day.
It’s storming all around me. Incredible winds... thunder/lightning... a small lake forming in the backyard... and I'm in a screened-in porch. I had to move close to the house and put a big bag around my laptop to protect it from the blowing rain so I could write while I enjoyed the sounds, smells, and feelings of the storm.
However, though externally I'm enjoying the storm, internally I'm a wreck.

It’s one of those days that's been a true roller coaster ride - jerky ups, steep downs, twists and turns and loops, and some boring straightaways. I fought with a company who misled me (and lost), contacted another company who charged me for something I didn’t receive (and won), filed for unemployment once again because they messed up at the unemployment office once again, had a huge fight with my daughter, was interviewed for an article about having a child who deals with mental illness, and did a few mundane chores.

Unfortunately, I don't have the choice of riding again. Most days include similar rides. Some are kiddie versions and some are the latest and greatest thrill rides, but for those who battle mental and physical illnesses as well as addictions, there are very few days with the option of not getting on at least one type of roller coaster.

Finding calm in the midst of these storms while riding that roller coaster is my goal. But how?

In every addiction recovery group, the importance of gratefulness is mentioned. It's also vital for those with mental illness... or who lean towards pessimism... or actually anyone breathing.

With everything I've gone through in my life, I thought I had justifiable reasons to be pessimistic. I use it as a safety measure - after all, if I've imagined and prepared for the worst thing that could happen, then I'd be ready for anything.

But it doesn't work that way. Looking for the bad in everything, consciously or unconsciously, takes its toll. I am a prime example that if you have that attitude long enough, it's extremely difficult to change.

Having several anxiety disorders doesn't help. In fact, they may be the cause. It's like the question of which came first - the chicken or the egg – but it really doesn't matter. It’s something that needs to be corrected.

My epiphany started with a phone call. It was pity-party time and my boyfriend mentioned that I should be grateful within my horrible situation. However, earlier in the conversation, he had his own pity-party about an issue he's having. I thought I was so clever when I turned the tables on him, telling him that he should also be grateful in his situation.

Then he said three words that floored me:

I was speechless. I wanted him to agree that us wallowing in pity was okay. I sat there and tried to think of a good counterargument.

In both situations, if we each looked hard enough, we could find something to be thankful for, even though just a few moments prior we each thought that these obstacles were insurmountable.

I then thought about other circumstances in my life that have been highly anxiety-producing lately: my eyesight and unemployment benefit problems. Both are massive issues.

Every time I look around and can’t see something in the distance clearly, it produces anxiety. The doctors said that my eyes just need more time to completely heal after my cataract surgeries but there's always that little voice saying, "But what if they don't?"

I am currently getting unemployment benefits (PUA) because there is almost no work currently in my field. You might be thinking, "But she can't work anyway due to the cataract surgeries." I could do photography shoots if I had to (it's just harder with these vision issues) so I’m relying on those benefits until events start back. Since I don’t know how long that will be, the anxiety keeps increasing every day my unemployment problems aren’t solved.

Either issue could make even the most optimistic person worry… and I’m definitely not an optimist. Plus, I am dealing with both as well as several other small, but very burdensome, matters.

So how can I possibly be grateful? I can understand accepting them as "things I cannot change" (from "The Serenity Prayer"), but being grateful?

Using the skills I use to find the worst in a good situation - and flipping it around - I found ways to be grateful even in bad situations.

Concerning my eyesight... I don't have to dread the cataract surgeries anymore; because they were postponed to a time when I am out of work, I've been able to rest and heal easier; and even though I can't see clearly yet, my vision is much better without correction than I’ve ever experienced in my conscious memory.

Concerning unemployment... Freelancers typically can’t get unemployment, so receiving anything is a blessing; through working on these latest unemployment issues, I found a mistake in my favor; I discovered a useful app that auto-redials (the only way I could get a human in the unemployment office); and I was able to pass along what I’ve learned to others having similar problems.

Concerning today’s issues... Although I lost money over the misleading subscription practices, at least I noticed it before I lost even more; the fight with my daughter helped me realize some things about myself that I need to work through; and I was able to contact unemployment the third time I called (a new record!) and hopefully fixed one of the issues.

So, though life might be storming around me while I'm riding that dang roller coaster (aren't rides supposed to be shut down during storms?) gratefulness might be the ticket that leads to calm in its midst.

And on a side note… the storm that was whirling around me when I started this post has now stopped. There's blue sky peeking through the clouds. Birds are singing. The wind is barely blowing. It's really mild for a late June afternoon in the South.

I loved the ferociousness of the storm but also love this calm. I just need to keep reminding myself that being grateful for the positive aspects of each will help me enjoy wherever I am - calm or storm.

... Just as I was finishing up this post and about to go inside, I heard "Taps" being played at a local cemetery.  I have never heard it from my home before. Hearing that wonderful song from so far in the distance during this enormous quiet after all of the sounds of the storm while writing this emotional blog is just one more reason I'm now calling today an amazing day.
Posted by Tracy at 5:30 PM

Join Me in the Spotlight to Erase Stigma